"If Berkeley had the good sense of the Japanese to recognize outstanding citizens as national treasures, Richard Schwartz would get my vote. Professionally a building contractor, Schwartz somehow finds time to explore Berkeley's past via its newspapers, archives, and maps. He has returned from that forgeign land to self-publish gracefully written and handsome books filled with period illustrations of his discoveries. Those books not only reveal to us a place we thought we knew but are testimony to Schwartz's deep love for his adopted town. I am grateful for his generousity in sharing his wealth." 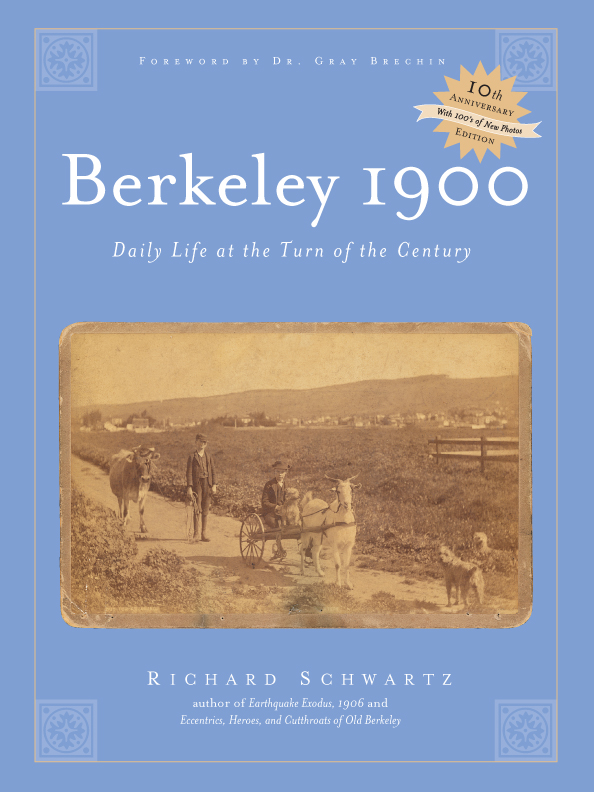 A SPECIAL 10TH ANNIVERSARY EDITION OF BERKELEY 1900 WITH HUNDREDS OF NEW ADDITIONAL PHOTOS, MANY OF WHICH HAVE NEVER BEEN PUBLISHED BEFORE, IS NOW RELEASED AND IS AVAILABLE ON THE WEB AND IN BOOKSTORES

"I admire your work."
"Just the other day, I cited your work as an example of the golden age of local history we are currently experiencing in California."
Dr. Kevin Starr, California State Librarian, Emeritus
University Professor and Professor of History
University of Southern California

Since its initial publication a
decade ago, Berkeley 1900: Daily Life at the Turn of the Century
has captivated readers with its unprecedented blend
of serious history, fascinating images and heartfelt
storytelling. Its eyewitness accounts and unique views
of Berkeley a hundred years past show how profoundly
the landscape, culture, economy and social values of
modern Berkeley have been shaped by what came
before. In this special tenth anniversary edition,
readers will discover a wealth of new source quotes and
nearly 200 additional photos, making Berkeley 1900
more than ever the definitive account of a pivotal time
in the life of one of America’s most beloved cities.
Berkeley 1900: Daily Life at the Turn of the Century, 2nd Edition,
By Richard Schwartz
8.5 x 11 inches; 330 pages; 320 images, Paperback
ISBN: 0-9678204-4-6; $24.95, Published September 2009
Distributed by Ingram, Partners West, Baker and Taylor Books, and American West Books.